The H2020 project FASTER, Farmers’ Adaptation and Sustainability in Tunisia through Excellence in Research, aims to reinforce the research and knowledge transfer capacity of INRGREF regarding innovative land and water management because of climate change, fostering its implementation through the use of Farm Advisory Systems (FAS).

To increase INGREF’s reputation and attractiveness internationally, the FASTER consortium developed a specific Spreading Excellence Strategy. Its’ activities aim to target a diversified geographical spectrum to enhance multiple access to scientific collaboration and opportunities of INRGREF, allowing for higher visibility, engagement, and promotion, leading to new partnerships with countries that can join Tunisian and European partners in scientific activities and eventually participating in EU funded schemes.

One of the three specific action plans that were developed in order to make this strategy actionable was holding two stakeholders’-oriented events and tailoring them to host Tunisian project partners and between 6-10 stakeholder guests. To maximize their input, sessions were held taking advantage of the World Café format, which effectively serves the Multi-Actor Approach and allows participants to provide active and valuable contributions. 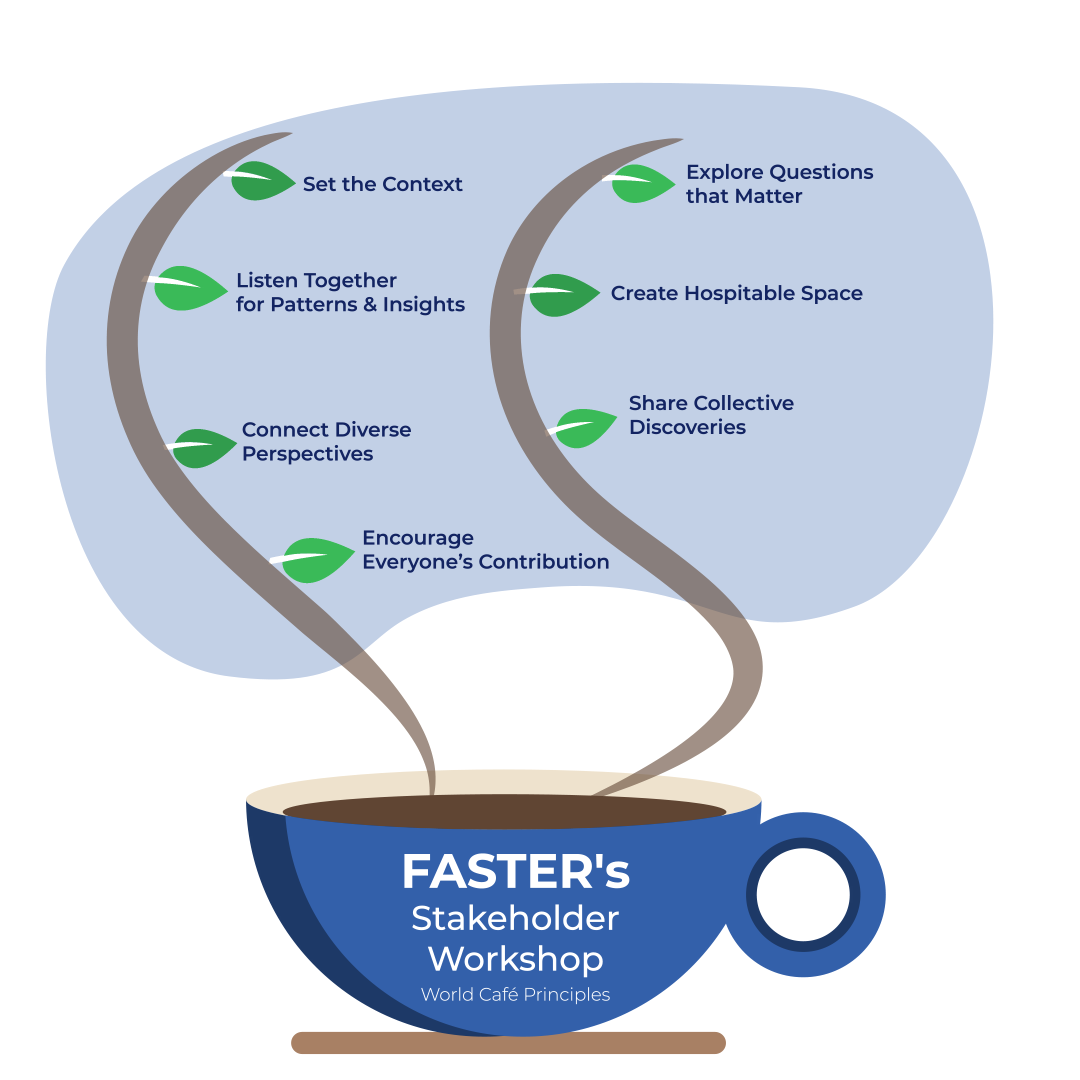 These subject matter experts came together to discuss the important role agriculture plays in adaptation. One of the subject matter experts in attendance, Rafael Rodríguez, shared, “adaptation is a social problem.” Oftentimes, people think that only natural areas that are not profoundly transformed, provide the ecosystems needed for a sustainable planet. However, local farms also play an important role in the health, and overall well-being of our local ecosystems. While discussing the need for farmers to adapt in light of our planet’s current challenges, Philippe Ker Rault stated, “Diversification is the best chance for farmers in the face of global changes.”

To promote the important role of agriculture within our ecosystem, there is an urgent need for interdisciplinary studies centered on this topic, along with collaboration between the public and private sectors. As Raoudha Gafrej noted during the stakeholder meeting, “There is a gap between researchers and policymakers, but we are all people in the end, and people can talk to each other.”

The more people who can become educated on this issue, the greater possibility that new ideas will be adopted. One example of a local innovative project is the use of the Living Lab approach. For new and innovative ideas like this one to be initiated all over the world, Abdelhamid Khaldi stated, “To be effective, you have to work at the local level.”

These subject matter experts discussed the idea that while living labs are good options to have at the local level, innovation hubs are necessary to scale the ideas from the lab for a broader impact. To make this idea a reality, Gustavo Pérez stated, “Innovation hubs should be launched by politicians and focused on territorial needs.” In any case, for any current, or future adaptation practices or projects to be successful, Daniele Rossi clarified, “stakeholder selection is key for project success.”

One of the most important ways for adaptation to be successful is to have a well thought out, and clearly articulated communication plan. By properly communicating to those individuals whom you are trying to reach, you will have an educated and conscientious group of people to put into practice new ideas. Slaheddine Khlifi believes that “INRGREF could lead the necessary societal transformation.”

The work that lies ahead will not be easy, but as Zouhaier Nasr shared, “We have to be positive and make the most of the current societal revolution.”

By bringing together thought leaders who specialize in global adaptation management, and research in the Mediterranean, these two stakeholder meetings contributed to achieving one of the main objectives of the FASTER project: supporting INRGREF in strengthening its guidelines for future research and innovation.

Subscribe to our Newsletter to stay informed about the activities carried out by the project.

© Faster 2020. All rights reserved
We use cookies to ensure that we give you the best experience on our website. If you continue to use this site we will assume that you are happy with it.Ok