The session was dedicated to studying living labs, which represent a form of open innovation, an approach designed to enhance cooperation between multiple actors sharing the same stake, such as researchers, public administration, farmers, FAS agents, practitioners and other stakeholders. 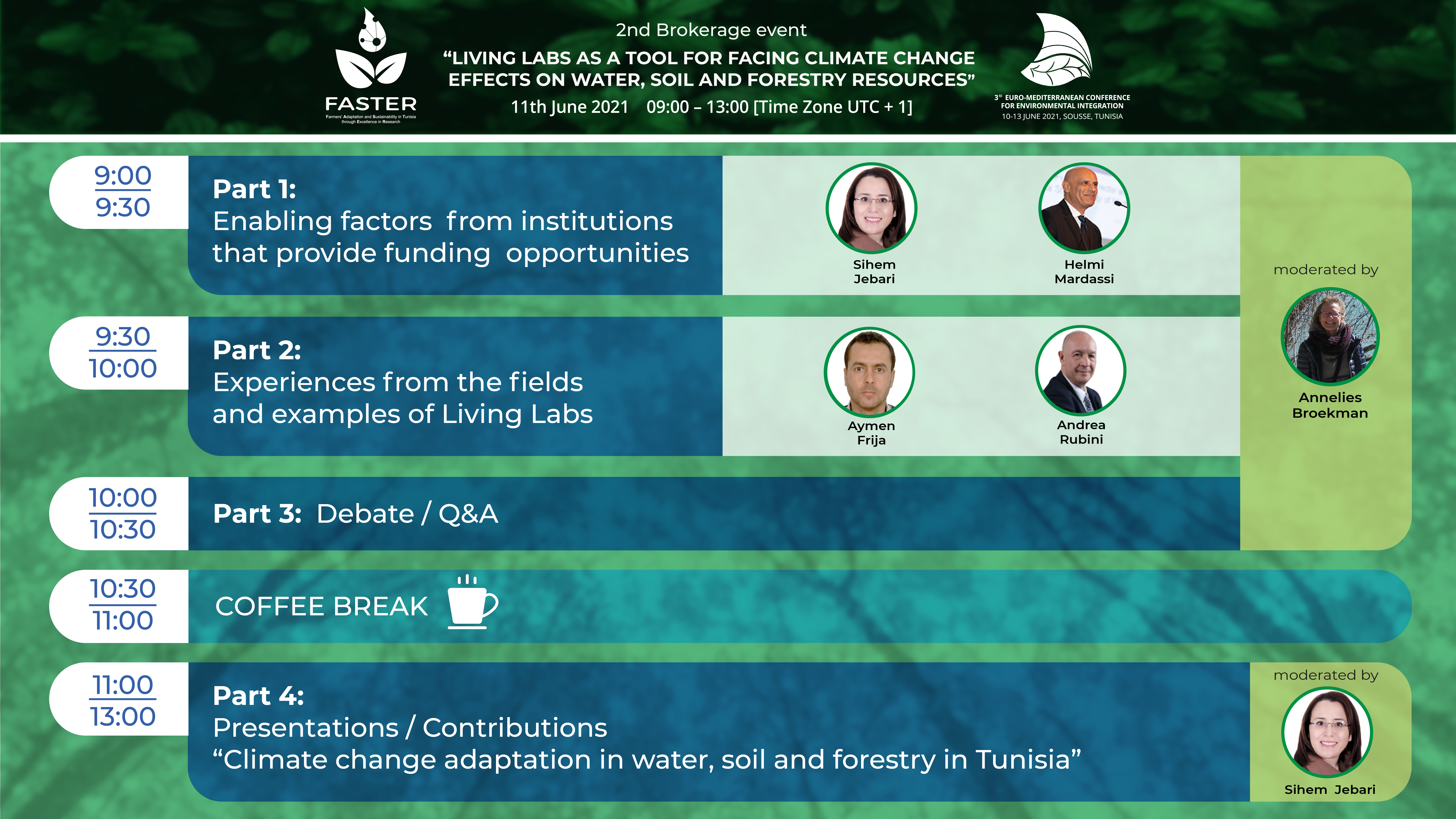 Sihem Jebari opened the floor, presenting the FASTER project, describing the project’s main objectives and features. Mrs Jebari explained the expected impacts and achievements delving into the FASTER FAS Living Lab. Launched in October 2019 and focused on knowledge transfer on adaptation to climate change strategies between researchers in water, soil and forest management and practitioners engaged in the Farm Advisory System in Tunisia (FAS). She described the activities that FASTER organised and will be developed to accomplish this objective, the co-creation of a set of fact sheets, the training for FAS Agents, the dissemination of knowledge of the factsheets to farmers and the field visits to share knowledge on adaptation measures.

Helmi Mardassi, in the name of the Tunisian authorities in environmental policies, highlighted the importance of the collaboration between the EU and the Tunisian State. He stressed the importance of Horizon 2020 projects, such as our FASTER project, to further Tunisian economic development and transform traditional sectors into added-value industries. Mr Mardassi pointed out that Tunisia has become a major partner of the EU funded programs. It is, in fact, the first Arabic country in terms of global EU sums allocated to Research & Innovation (R&I) through the program Horizon 2020, with more than 10 million euros. On behalf of UGPO-H2020, he underlined that the project’s main goal is to consolidate Tunisian actors participation in EU funded programs as the best way to promote the international visibility of the Tunisian R&I system. To ensure a sustainable governance body and leverage for a thriving socio-economic sector to face upcoming challenges such as adaptation to climate change, which is a concern for both Tunisian authorities and European Institutions, the latter including it within the five missions of Horizon Europe.

Successively, Andrea Rubini focused on the concept of living labs and how these have explicitly helped shift water research programs funded by the EU. Living labs have a fundamental role in improving coordination and collaboration in the water ecosystems in the EU and beyond. These methodologies help improve competitiveness and contribute to tackling global water challenges like water scarcity. The living labs are an R&I concept based on multi-stakeholder cooperation, i.e. users, private actors, public institutions and knowledge institutions collaboration in real-life contexts. Their efficiency illustrates the significance of these labs in terms of channelling knowledge into sustainable markets. In this sense, living labs would define themselves as the most suitable way to transform the current dynamic of “take, make, consume and dispose of,” which characterises a great part of consumers and producers interactions, into a more efficient and resilient system.

Mr Aymen Frija agreed that including all participants in the productive chain within the strategies should lead them towards a more efficient production and consumption. Moreover, he focused on how to approach each stakeholder properly. Therefore, it is crucial to focus on communication to address each person who intervenes efficiently. As Mr Frija underlined, one of the main problems in the agricultural economy is the adoption of innovation by smallholders’ farmers and the lack of appropriate technology transfer despite the high knowledge found in North African countries. Thus the issue is not on generating knowledge but on managing it. One of the proposed solutions is to implement the “4 Wheels approach” for partnerships, which means standardising the communication strategies for each type of stakeholder. This should be done along with the creation of common physical spaces where the diverse stakeholders could interact and why Mr Frija also defended the idea of creating knowledge hubs, physicals structures that would support the dissemination of knowledge at the local level.

After these presentations, the audience had the opportunity to ask several questions about mainly technical spheres, such as the procedure to get an EU grant. However, they were also focused on dealing with particular obstacles when carrying out a project in the field, such as managing conflicts between stakeholders or language limitations.

In the last part of the sessions, moderated by Sihem Jebari, the authors of selected papers presented their works on climate change adaptation in water, soil and forestry in Tunisia. It was a great chance to see the impact of human activity in particular cases, for instance, those carried out in the Medjerda basin or Melllegue watershed. These are the feasible solutions that could be provided by technical expertise to favorise those regions and the communities living there. According to official data, soil desertification, deforestation, climate change, or land degradation are challenges that Tunisia has the face as one of the countries that would be more affected by climate change. This is why all participants agreed on the need to join forces and implement effective projects where all participants should be and feel represented.

This online session was a great opportunity to spread awareness on the areas where FASTER is acting, for instance, enhancing the Tunisian agricultural sector or supporting cooperation between Tunisian stakeholders in the primary sector.  It was also an occasion to exchange knowledge and expertise with both the audience and among other experts. Only by joining forces from all stakeholders will we overcome the current environmental challenges in Tunisia and work towards a greener future.

Subscribe to our Newsletter to stay informed about the activities carried out by the project.

© Faster 2020. All rights reserved
We use cookies to ensure that we give you the best experience on our website. If you continue to use this site we will assume that you are happy with it.Ok